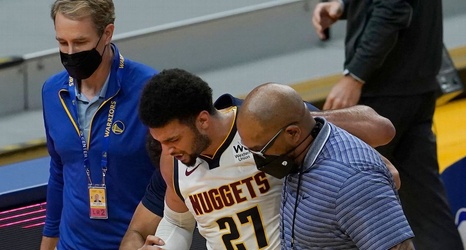 SAN FRANCISCO -- Denver Nuggets guard Jamal Murray injured his left knee at the end of the fourth quarter of Monday's game against the Golden State Warriors and did not return.

The Nuggets are working to get Murray an MRI on the knee to evaluate the severity of the injury, a source told ESPN's Adrian Wojnarowski.

The injury occurred with 50.6 seconds left in the fourth quarter as Murray drove to the rim. It appeared to be a non-contact injury as Murray crumpled to the ground in pain after trying to make a play at the rim.