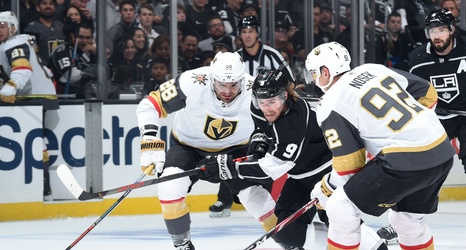 Following their 6-2 success over the Calgary Flames on Saturday at T-Mobile Arena, the Vegas Golden Knights hit the road last night and spoiled the Kings’ chances of completing their own double-header sweep this weekend.

It was a fast start from the Knights who struck first at 5:42 in the first period as Reilly Smith converted his fourth goal of the year, before Max Pacioretty scored on the power play mere minutes later.

Austin Wagner got LA on the board soon after but Vegas’ power play exploded in the second period with Paul Stastny grabbing two goals on the man advantage.