The beginning of the “New Age” Canucks starts next year 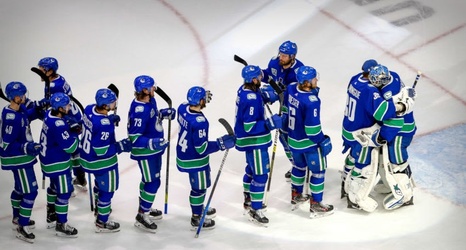 Sep 3, 2020; Edmonton, Alberta, CAN; Vancouver Canucks goaltender Thatcher Demko (35) and goaltender Louis Domingue (30) and the Canucks celebrate the win over the Vegas Golden Knights in game six of the second round of the 2020 Stanley Cup Playoffs at Rogers Place. Mandatory Credit: Perry Nelson-USA TODAY Sports

The Vancouver Canucks have made some changes to their roster that will cause them to depend on their youth. The time of the “New Age” starts now.