Thatcher Demko signs a five-year extension with the Canucks 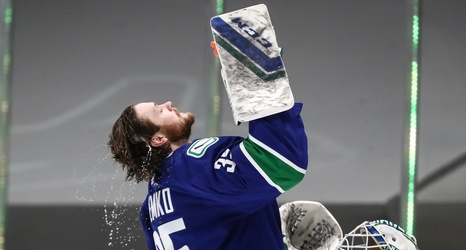 The Vancouver Canucks were heading towards the offseason with three incredibly important contracts that needed to be signed.

One down, two to go.

Sportsnet’s Elliott Friedman and TSN’s Frank Seravalli are both reporting that Thatcher Demko has signed a five-year extension with the Canucks, with an average annual value of $5 million.

Hearing from Vancouver: #Canucks and G Thatcher Demko are closing in on a long-term extension. 5 years, $25 million. #TSN

Demko unofficially became the starting goaltender for the Canucks in the Edmonton bubble last August, when he tortured the Vegas Golden Knights with other-worldly goaltending, single-handedly carrying the Canucks within minutes of the Western Conference Semifinals.