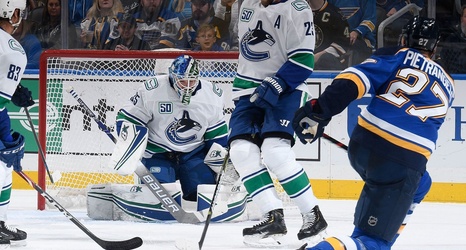 The Vancouver Canucks moved into a three-way tie for a playoff spot with last night’s win over the defending Stanley Cup Champions. Here’s what I noticed from last night’s game.

Demko’s second start (and win) of the season

Much has been made of Thatcher Demko‘s development up to this point in his career. Right from the day he was selected 36th overall in the second round of the 2014 NHL Entry Draft, Demko has been tabbed the goalie of the future by Canucks fans.

After spending two seasons with the Utica Comets, Demko is finally up with the big club and ready to be the backup for his first full season playing behind Jacob Markstrom.