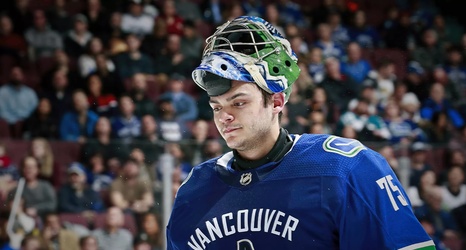 He may not see any game action during this NHL stint, but that shouldn’t take anything away from Mikey DiPietro’s strong start in the AHL.

Earlier today, the 20-year-old netminder was recalled from the Utica Comets after the Vancouver Canucks granted Jacob Markstrom a leave of absence to attend his father’s funeral back in Sweden.

The circumstances in which DiPietro finds himself in following this recall is vastly different from the one that saw him join the Canucks on an emergency basis back in February. He got lambasted that night behind a shaky Canucks defence, giving up seven goals in a 7-2 loss to the San Jose Sharks.