Canucks: Yes, the Sedin twins belong in the Hall of Fame 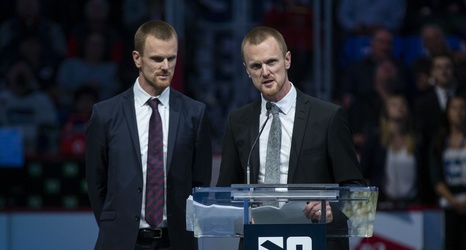 On Wednesday night, Daniel and Henrik Sedin were officially enshrined in Vancouver Canucks immortality, as they watched No. 22 and No. 33 get raised to the rafters of Rogers Arena.

When the twins retired two years ago, there was no doubt that the franchise would eventually retire their numbers. They are by far the two greatest players in Canucks history, and we’ll never see a dynamic duo like this ever again.

The question now is if Daniel and Henrik will receive the even greater honour of getting inducted into the Hockey Hall of Fame. They’ll be eligible in 2021, and the debate has already begun.