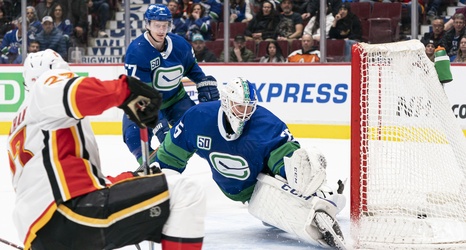 The Vancouver Canucks simply couldn’t match the sheer drive and will power of the Calgary Flames, leading Van-city to forfeit two points in a 6-2 collapse on Saturday night. The Canucks kicked off a six-game homestand losing their fourth consecutive game, snapping a nine-game home win streak in the process, yet Vancouver still has a single point lead in the very competitive Pacific Division.

With last night’s battle picking up some serious tempo, it appears playoff hockey is coming early this year. Not literally, but with the Pacific Division being as close as it is, Saturday night’s game had the passion and excitement of postseason puck.