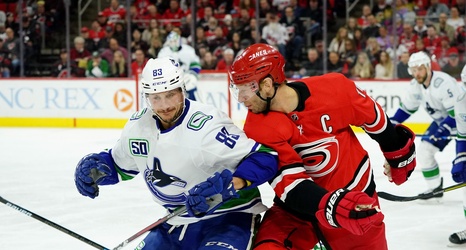 Feb 12, 2020; Vancouver, British Columbia, CAN; Twin brothers Daniel Sedin (22) and Henrik Sedin (33) of Sweden have their Vancouver Canucks jerseys retired to the rafters of Rogers Arena in a ceremony prior to a game between the Vancouver Canucks and Chicago Blackhawks. Mandatory Credit: Bob Frid-USA TODAY Sports

There have been many dynamic duos throughout the history of the league, but the Vancouver Canucks were fortunate to have the very best in Henrik and Daniel Sedin. Originally drafted by the Canucks with the 2nd and 3rd overall picks in the 1999 NHL Entry Draft, the Sedin twins would end up playing over 2600 combined games with the organization, evolving from quiet, dynamic forwards to game-changing, legendary franchise superstars.