Canucks: Markstrom’s elite play could price himself out of Vancouver 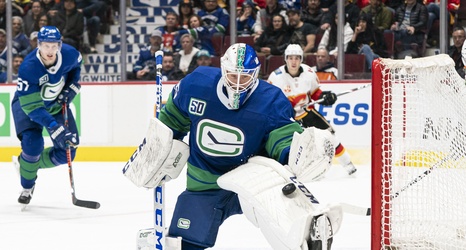 Once again, Jacob Markstrom bailed out the Vancouver Canucks and stole a big two points to cushion the lead perched on top of the Pacific Division. He did it in record-breaking fashion on Sedin Night with a 49 save shutout performance. With easily over a dozen highlight-reel saves, it was arguably his best game of the 2019-20 campaign.

Time and time again Markstrom has been the best player for Vancouver. Well deserved, he’s the frontrunner for team MVP and it’s tough to imagine where the Canucks would be without him. He’s an All-Star goalie who’s due for a big pay bump, and Vancouver needs to find a way to get a deal done.