Canucks: Hub cities would be a game changer 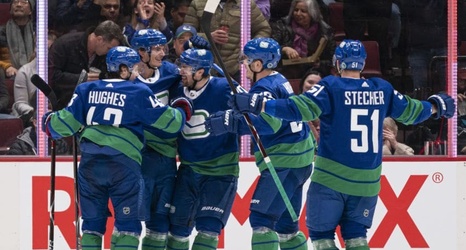 VANCOUVER, BC - JANUARY 18: Loui Eriksson #21 of the Vancouver Canucks is congratulated by teammates Quinn Hughes #43, Tanner Pearson #70, Bo Horvat #53 and Troy Stecher #51 after scoring a goal against the San Jose Sharks in NHL action on January, 18, 2020 at Rogers Arena in Vancouver, British Columbia, Canada. (Photo by Rich Lam/Getty Images)

The NHL season has been on pause, but talk of resuming the season has ramped up. Here is why hub cities are a great idea for the Vancouver Canucks.

NHL commissioner Gary Bettman has made it extremely clear that he has no intention of cancelling the 2019-2020 season.