Canucks: How the Sedins can help right away during the offseason 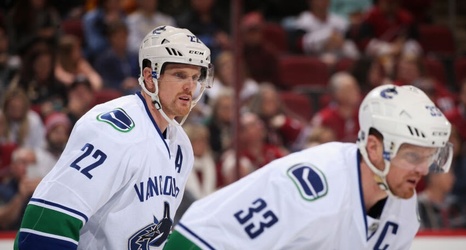 GLENDALE, AZ - NOVEMBER 23: (L-R) Daniel Sedin #22 and Henrik Sedin #33 of the Vancouver Canucks await a face off against the Arizona Coyotes during the first period of the NHL game at Gila River Arena on November 23, 2016 in Glendale, Arizona. (Photo by Christian Petersen/Getty Images)

It’s been just over a week since the Vancouver Canucks brought in Henrik and Daniel Sedin to their front office, and the hype is still just as high as it was on day one.

As we know, the two Vancouver legends didn’t have the smoothest of debuts into the NHL, and into the hearts of fans, but that didn’t stop them from working hard and paving their way to unbelievable careers.