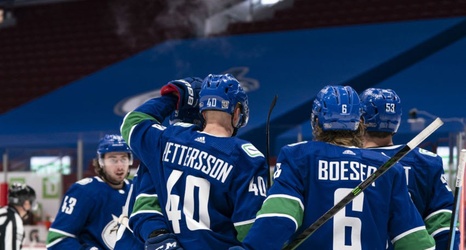 VANCOUVER, BC - JANUARY 27: Elias Pettersson #40 of the Vancouver Canucks celebrates with teammates Quinn Hughes #43, JT Miller #9, Brock Boeser #6 and Bo Horvat #53 after scoring a goal during NHL hockey action against the Ottawa Senators at Rogers Arena on January 27, 2021 in Vancouver, Canada. (Photo by Rich Lam/Getty Images)

The Vancouver Canucks fell mightily during the 2021-21 season after a deep playoff run in the bubble. Now, the team enters a crucial offseason with a variety of key pieces that need to be addressed, including preparation for NHL Entry Draft, attempting to land a third-line centre and/or top-four right-handed defenceman, and finalizing the new contracts of current restricted free agents and franchise stars Elias Pettersson and Quinn Hughes.