Canucks: Could the assistant coaching staff look different next year? 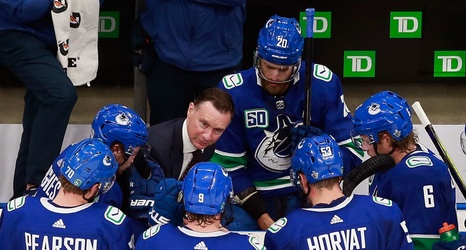 EDMONTON, ALBERTA - AUGUST 21: (L-R) Newell Brown, Nolan Baumgartner, Manny Malhotra and Travis Green of the Vancouver Canucks watch warm-ups prior to their game against the St. Louis Blues in Game Six of the Western Conference First Round during the 2020 NHL Stanley Cup Playoffs at Rogers Place on August 21, 2020 in Edmonton, Alberta. (Photo by Jeff Vinnick/Getty Images)

There has been a lot of questions surrounding the Vancouver Canucks and their coaching staff this offseason.

For the most part, the focus has heavily been on head coach Travis Green and goaltending coach Ian Clark, both of whom were in the final years of their current deals this past season.