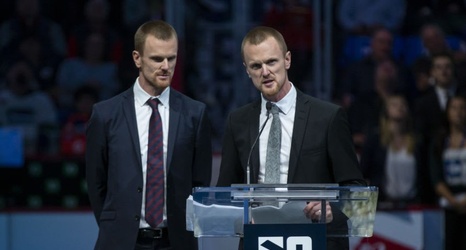 VANCOUVER, BC - FEBRUARY 20: Henrik Sedin speaks to the crowd near Daniel Sedin during a ceremony celebrating their careers as Vancouver Canucks on February 12, 2020 in Vancouver, Canada. (Photo by Ben Nelms/Getty Images)

Henrik and Daniel Sedin, arguably the two greatest Vancouver Canucks’ players of all time, are finally returning to the organization.

On Tuesday afternoon, the team released an official statement, naming the twins as Special Advisors in the Hockey Operations Department. On Wednesday, the franchise’s all-time points leader and all-time goals leader, alongside General Manager Jim Benning, spoke to media for the first time in their new positions.