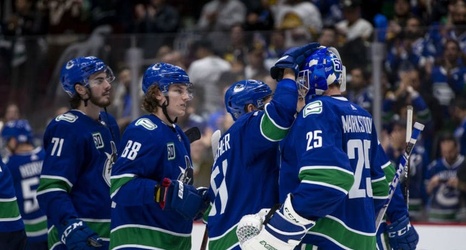 VANCOUVER, BC - FEBRUARY 20: Goaltender Jacob Markstrom #25 of the Vancouver Canucks celebrates his shut out win over the Chicago Blackhawks at Rogers Arena on February 12, 2020 in Vancouver, Canada. (Photo by Ben Nelms/Getty Images)

The Vancouver Canucks have a healthy roster thick with scoring talent that could shock the hockey world if and when the 2020 playoffs get underway.

The 2019-20 Vancouver Canucks have been a fun and exciting group of players to watch this season. Travis Green has done an excellent job making the most of what/who he has to work with up to this point, and the result of it all has been a highspeed team that can beat opponents with a relentless attack of scoring depth.