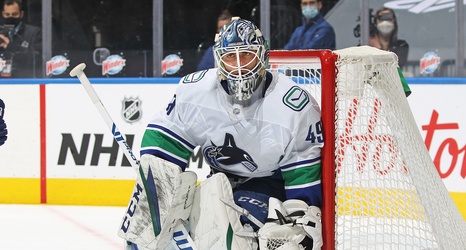 TORONTO, ON - FEBRUARY 4: Braden Holtby #49 of the Vancouver Canucks warms up prior to action against the Toronto Maple Leafs in an NHL game at Scotiabank Arena on February 4, 2021 in Toronto, Ontario, Canada. (Photo by Claus Andersen/Getty Images)

After coming away with a thrilling 3-2 win on Friday, the Vancouver Canucks dropped their final game of their road trip by losing 5-4 to Montreal in a shootout.

If I’m being honest, the Canucks were lucky to even earn a point last night, as they were badly outshot and outplayed for most of the game.