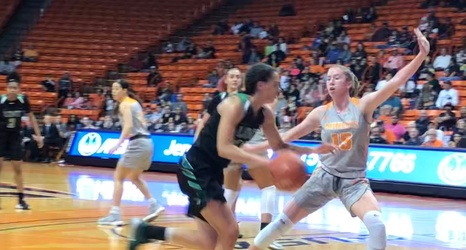 The play that capped UTEP's epic uphill grind, a 67-63 victory against North Texas, was the perfect metaphor for a victory that was all about grit.

Tied at 63 in the final 15 seconds of a game where the Miners had not led since the first 90 seconds, Ariona Gill drove the lane and lost her balance. As she crashed to the floor, she shoveled the ball out to Jade Rochelle, who missed a 15-footer.

In a game where UTEP just kept coming back and coming back, Gill pulled herself up off the floor, grabbed the rebound and followed it home for a 3-point play and the Miners' first lead since the game's early stages.