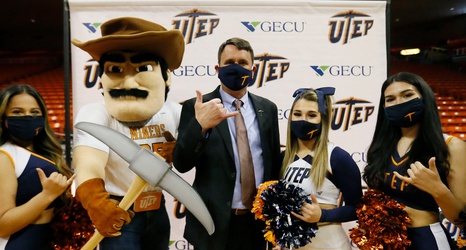 UTEP's 20th men's basketball coach Joe Golding was brought to El Paso because over 10 years he built Abilene Christian from a mediocre Division II program to the Cinderella that slew Texas.

He made it clear at his introductory press conference Wednesday at the Don Haskins Center that he left that model in Abilene.

There, Golding was known for a patient hand and recruiting high school players, which enabled him to engineer a decade-long building program.

With six players from last season's 12-12 UTEP team in attendance at the Don Haskins Center, Golding laid out a different timeline than the one he followed in ACU's transition from Division II to Division I doormat to national darling.