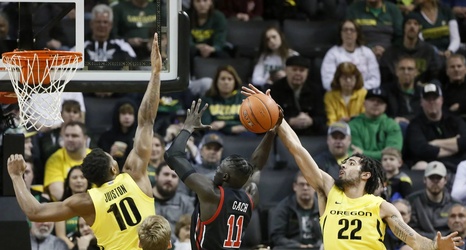 Not a real surprising result on Sunday night, as the Utes fell to Oregon 80-62 in Eugene, completing the road sweep, and the season sweep by the Ducks. Rylan Jones led the Utes with 18 points on 4-of-8 shooting from deep while Branden Carlson and Timmy Allen added 10 points apiece. Allen also had six assists on the night while Carlson had seven boards. Before the game I wanted to see Jones be the aggressor and lead the Utes, which I’m happy to see. The rest of the squad just doesn’t have enough offensive firepower to keep up with a team like Oregon, who blistered the nets from three point range on Sunday.