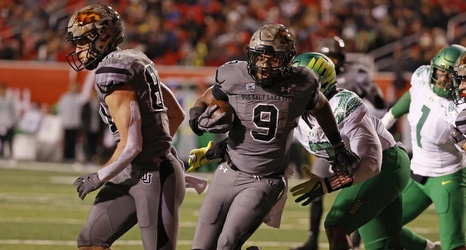 It was a heavyweight fight, but one heavyweight threw a few haymakers and knocked the other out fast. The No. 23 ranked Utes took the No. 3 ranked Oregon Ducks behind the woodshed on Saturday night in front of 52,000+ fans at Rice-Eccles Stadium to clinch the Pac-12 South Championship with a 38-7 win. It was one of the most dominating wins we’ve seen in a long time, especially against a high-level opponent like Oregon.

Utah scored on their second possession of the game, scoring on six of their nine total possessions. One of the possessions they didn’t score on was the kneel at the end of the game.