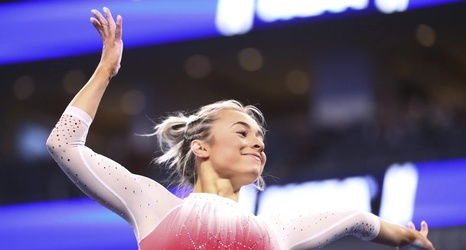 The fourth-ranked University of Utah Red Rocks hit West Valley City on Friday night to showcase their prowess against their in-state rivals, Utah State, BYU, and Southern Utah in the third annual Best of Utah meet.

A trio of freshmen opened the evening as Amelie Morgan, Grace McCallum, and Kara Eaker turned in solid routines, all resulting in 9.875’s. Senior Cristal Isa, whose bar routine is one of the only on the roster to feature consecutive back handsprings, broke out with the event’s high score for the Red Rocks with a 9.900. Abby Paulson was a bit wobbly from the start with her chest and shoulders falling forward during the early parts of her routine before eventually slipping awkwardly, earning a 9.