Power Rankings Roundup: How did the Utah Jazz fare in week 7? 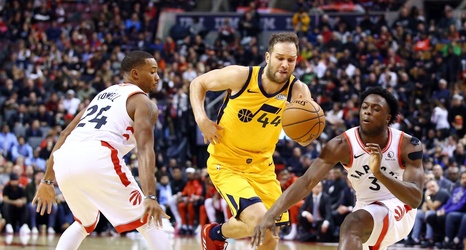 For the Utah Jazz, the past seven days have been rough. Tonight they will conclude their longest road trip of the season against the Philadelphia 76ers, less than 24 hours after an embarrassing defeat at the hands of the Toronto Raptors. Despite putting up a franchise high 49 points in one quarter, they still lost by 20 points to the defending champs, which illustrates just how putrid the other three quarters were.

For a while it seemed like Utah was about to turn the corner with their heartfelt win over the New Orleans Pelicans and close loss to the Milwaukee Bucks, despite not having Defensive Player of the Year Rudy Gobert in either of those bouts.