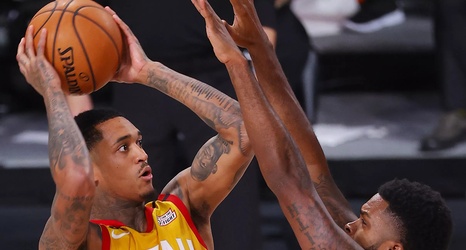 SALT LAKE CITY — The numbers 8 and 24 are coincidentally rooted in and sprinkled throughout the rules of basketball. They’re also the jersey numbers worn by Kobe Bryant during his 20 year career with the Los Angeles Lakers, the last two years overlapping with Utah Jazz sixth man Jordan Clarkson.

Clarkson had idolized Bryant growing up and was beside himself when Bryant went from idol, to teammate, to mentor and eventually friend.

On what would have been Bryant’s 42nd birthday, Jordan Clarkson scored 24 points in the Jazz’s Game 4 win over the Denver Nuggets on Sunday.