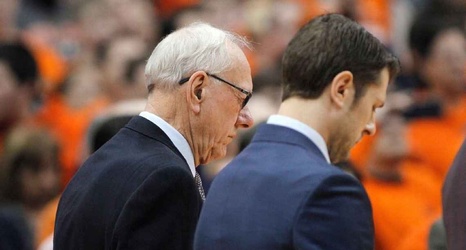 SYRACUSE, N.Y. -- Jim Boeheim said the fatal accident he was involved in on Wednesday night that resulted in the death of Jorge Jimenez is "something that will be with me for the rest of my life."

Boeheim on Saturday night took the court for the first time since Wednesday's tragic accident, exiting the locker room with 2:33 remaining before tip-off. The record crowd at the Carrier Dome gave him a massive standing ovation. Boeheim briefly acknowledged the crowd and then walked over to Duke head coach Mike Krzyzewski, a longtime friend, and the two coaches embraced.

A message was read by the arena's public address announcer in both English and Spanish, recognizing those impacted by the tragedy and honoring the life of Jimenez, followed by a moment of silence.