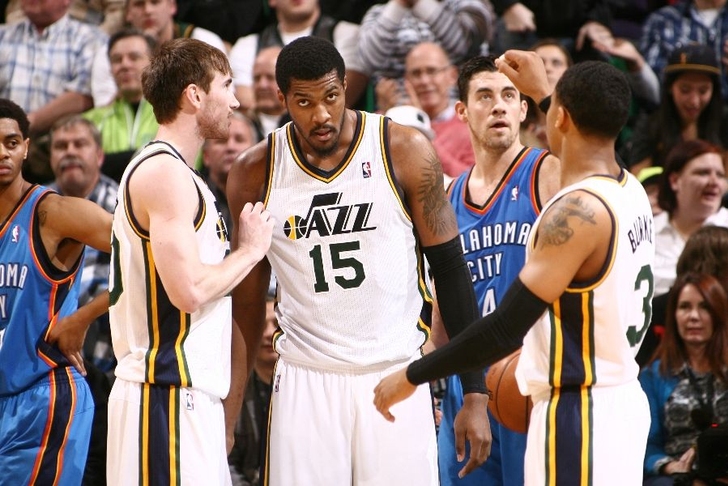 Utah suffered through a rough 2013-14 season, finishing in the cellar of the loaded Western Conference. The Jazz got off to a terrible 1-11 start and were never able to recover, finishing 25-57. Utah didn't offer former head coach Ty Corbin a new contract, opting instead to bring in former Atlanta assistant Quin Snyder to run the show.

In the offseason, they drafted Australian guard Dante Exum with the 5th overall pick in the draft and snagged Duke product Rodney Hood with the 23rd pick, both of whom will be expect to have big roles for Utah this season. The fan base hasn't had a lot to cheer for since legendary head coach Jerry Sloan retired and point guard Deron Williams was traded in 2011, and they're anxious to root for a winner again.

Utah selected point guards Trey Burke and Dante Exum high in the first round in back-to-back years, and each was brought in to be the starting point guard. The Jazz insist that the two can play together, but the realization that Exum is significantly better as the primary ballhandler has him as the front-runner to win the job. Shooting guard Alec Burks also has shown great improvement this offseason, meaning Burke might find himself coming off the bench.

Another storyline will be to see how the Jazz fare against the other young teams in the Western Conference. Utah, Minnesota, New Orleans, and Sacramento are all fairly even in talent level, and all are capable of making a jump the standings similar to what the Suns did a year ago. How the Jazz fare against those teams early in the season will be a great indicator of whether Utah is moving in the right direction or if they need to make some changes to their roster.

Dante Exum was advertised before the draft as a player who could be the cornerstone of a franchise for the next 15 years. There will be major growing pains for Exum this season - he's only 18 years old and is facing a HUGE step up in competition - but he needs to start developing chemistry with Utah's other young players and show flashes of the brilliance for the franchise to feel comfortable having him as their leader.

Utah has talent, and if they were in the East, they'd be fighting for a playoff spot. However, in the loaded Western Conference, Utah will be at the very bottom of the standings. This will be Snyder's first season as a head coach in the NBA, and this young team doesn't know how to win games yet. The future is bright in Utah, but they're still a player or two and a season or two away from really making an impact in the West.

How do you think Utah will do this season? Tweet your thoughts to@brauf33 and leave a response in the comments!