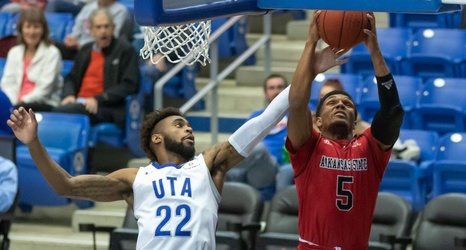 The men’s basketball team (11-15, 7-8) ended a two-game losing streak with a 77-67 win over Arkansas State University on Thursday at College Park Center.

UTA entered Thursday’s matchup in a tie for sixth place in the Sun Belt Conference. The Mavericks shared a 6-8 conference record with Coastal Carolina University.

Senior guard Brian Warren started the game off the bench, marking the fifth time the Indianapolis native has been out of the starting lineup.

Head coach Chris Ogden said he expects to stick with Thursday’s starting lineup for the rest of the regular season. He said bringing Warren off the bench gives UTA an advantage.