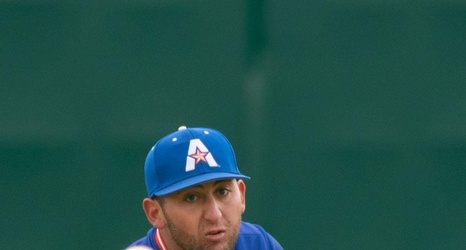 Senior pitcher Andrew Gross pitches the ball during the game against the University of South Alabama on March 30 at Clay Gould Ballpark. Gross was drafted by the Tampa Bay Rays.

Senior pitcher Andrew Gross was drafted by the Tampa Bay Rays in the 39th round of the MLB Draft on Wednesday.

The 1178th overall pick, Gross is the 64th Maverick to be selected, and his selection marks the 11th consecutive year a UTA player has been drafted.

Gross led the NCAA in saves for much of the season and currently sits at second with 17.