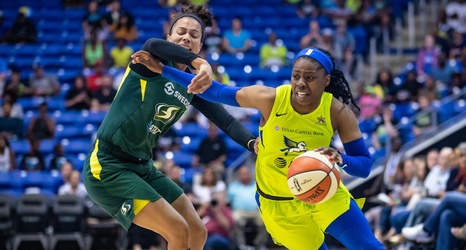 Arike Ogunbowale closed out her WNBA Rookie of the Year campaign as the Dallas Wings (10-24) fell to the Seattle Storm (18-16) 78-64 Sunday at College Park Center.

Ogunbowale came into Sunday’s game ranked third in the WNBA in points per game, averaging 18.9 points on the season.

“The future is bright for our league,” guard Skylar Diggins-Smith said. “She’s Rookie of the Year, in my opinion.”

The fifth pick in the 2019 WNBA Draft recorded her 11th 20-point game of the season, cementing her place in the WNBA record books as the only rookie to accomplish the feat.