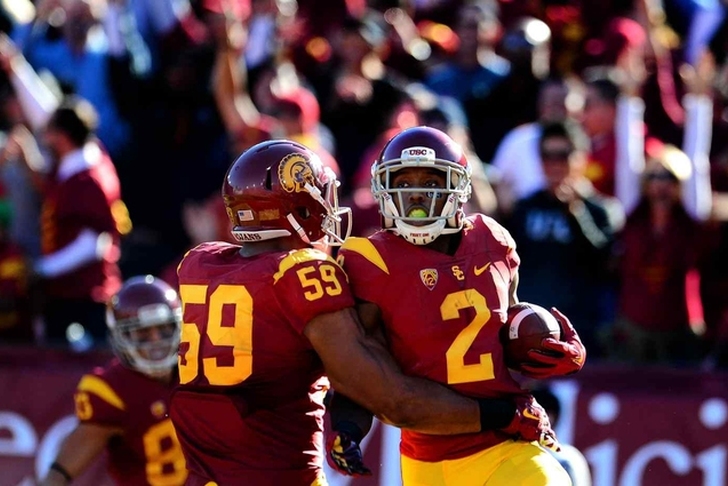 The USC Trojans overcame the dismissal of head coach Steve Sarkisian to earn a spot in the Pac-12 Championship game against Stanford. As a result, interim coach Clay Helton had the interim tag removed and is now the Trojans' full-time coach. He'll get to lead USC in a bowl game, but exactly what bowl game it will be is still undecided. That's because the Trojans could finish anywhere from the No.1 Pac-12 team (if it wins the Pac-12 title) or the conference's No. 4. Remember, bowls choose teams not by standings, but by their preference. With that in mind, here are the 4 Most Likely Bowl Destinations For USC This Year:

If you don't recognize the Foster Farms' Bowl, you probably know it by one if its previous names; the Kraft Fight Hunger Bowl or the Emerald Bowl. The Foster Farms' Bowl gets fourth pick of Pac-12 teams it's unlikely USC will slip any further than fourth among Pac-12 teams. This would allow the team to stay in California, which would help ticket sales. A lower ranked Big Ten team likely awaits the Trojans if they end up here.

This is the most prestigious of the non-New Year's Six bowl games the Pac-12 is eligible for. It has second choice of Pac-12 teams and could pick USC. Oregon is a strong contender for this spot, but it could go to USC. A Big 12 team awaits, and the Alamo Bowl gets first pick among teams that don't play in a New Year's Six game. Because of its location, TCU is favored to head to this game.

It's simple: If USC beats Stanford, the Trojans are headed to the Rose Bow. It's an automatic bid and USC would love to close its season with a trip to Pasadena. Ohio State is the likely opponent, because the Buckeyes travel well and that's always good for tickets and ratings. The loser of the Big Ten Championship game could also play in this one.