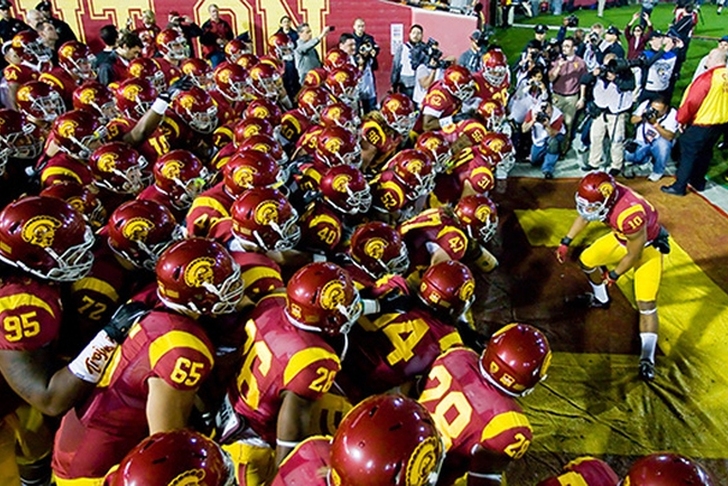 The USC Trojans overcame the dismissal of head coach Steve Sarkisian to earn a spot in the Pac-12 Championship game against Stanford. As a result, interim coach Clay Helton had the interim tag removed and is now the Trojans' full-time coach. The Trojans could finish anywhere from the No.1 Pac-12 team (if it wins the Pac-12 title) or the conference's No. 4, meaning there are a wide variety of bowl games they could go to and potential opponents they could face. However, here are the three teams they're most likely to go up against this postseason:

We may be cheating on this one, but if USC manages to beat Stanford in the Pac-12 Championship Game, they'll play in the Rose Bowl against the Buckeyes. This would be THE best non-playoff matchup of the bowl season, and one that Rose Bowl officials are undoubtly rooting for. There is the chance the the Trojans would face the loser of the Big Ten Championship Game instead, but the Rose Bowl seems to have their sights set on Ohio State.

The USC Trojans may very well make the drive up the I-5 to the Bay Area for the Foster Farms Bowl - the second bowl game ever to be played at the new Levi's Stadium in Santa Clara, the site of Super Bowl 50. If that is indeed the case, there are plenty of subplots that could make USC/Penn State an intriguing matchup for the bowl's organizers. The Trojans are 5-4 against Penn State all-time, and a bowl win over a storied program like PSU could do wonders for the returning Trojans players' collective confidence heading into 2015.

The Valero Alamo Bowl is the most prestigious of the non-New Year's Six bowl games the Pac-12 is eligible for and has second choice of Pac-12 teams. They're expected to pick USC if they don't go to the Rose Bowl, matching them up against a quality Big 12 team, which is expected to be the Horned Frogs.