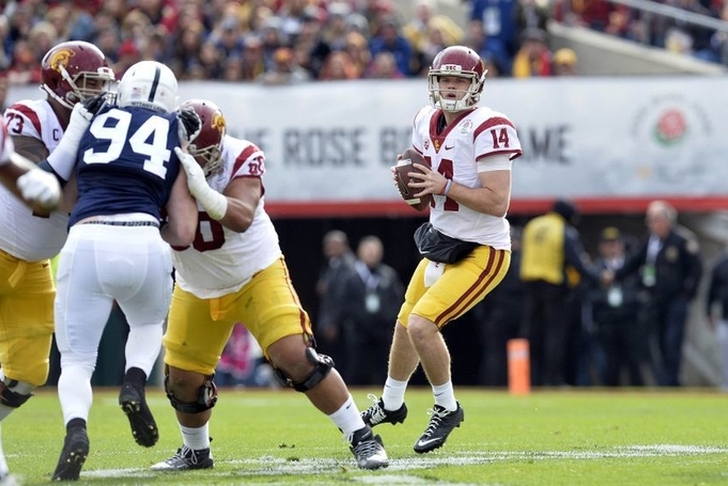 The USC Trojans were down by 14 points with less than nine minutes to play in the game, but that didn't deter them. USC used a dramatic fourth-quarter comeback - including a game-winning field goal as time expired - to give them a 52-49 victory over the Penn State Nittany Lions in the Rose Bowl. It was the highest scoring Rose Bowl in the game's history.

Early on, it looked like USC would run away with this game. Penn State quarterback Trace McSorley threw two interceptions on his first two passes, allowing the Trojans to build 20-7 and 27-14 leads late in the second quarter. PSU managed to score a touchdown to make it a one possession game right before the half, setting the stage for a dominant third quarter.

Both sides traded touchdowns to close the quarter, but USC found the end zone two more times - including a 27-yard touchdown pass from Sam Darnold to Deontay Burnett to tie the game, 49-49, with 1:20 left in the game.

Penn State got the ball back with a chance to win the game and went for it, but McSorley was intercepted by Leon McQuay III, putting USC in position to kick the game-winning field goal:

THEN #USC PICKS IT OFF! #Trojans with a chance to win! #RoseBowl #PSUvsUSC #FightOn pic.twitter.com/Zks3AnlFuX

USC now ends the season on a nine-game winning streak, giving them a 10-3 overall record. Without much of a running game, the Trojans relied on quarterback Sam Darnold to carry them - and he delivered. He completed 33/53 passes for 453 yards with five touchdowns and an interception while both Burnett (164 yards, three TDs) and JuJu Smith Schuster (133 yards, TD) recorded over 100 receiving yards on the day.