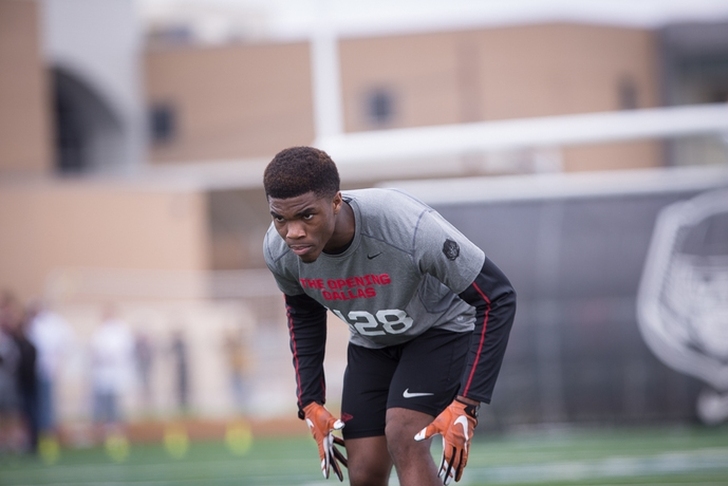 The USC Trojans and head coach Clay Helton have already put the finishing touches on a banner 2016 recruiting class, and the focus now is on bringing home another top-ten haul for 2017. With that being said, here's Helton's top seven targets for the 2017 cycle.

7. WE Tyjon Lindsey (California)
Lindsey is built slight at just 165 pounds, but the #3 wide receiver in the nation makes up for a lack of size with incredible burst, speed, and home-run playmaking ability.

6. OT Austin Jackson (Arizona)
Jackson is far from polished, but he has all of the physical tools to be an elite offensive tackle. The sky's the limit for him if he finds the right coach to help evolve his athleticism into skill.

5. WR Donovan Peoples-Jones (Michigan)
Our pick for the best pure athlete in the class, Peoples-Jones can do anything teams ask of him from a skill-position standpoint. However, his real bread and butter is at receiver. Peoples-Jones is developing the patience and route awareness that college WRs need to gain and maintain elite status.

4. OT Foster Sarell (Washington)
Sarell is an offensive tackle built for future NFL Sundays. Measuring in at 6'7" and possessing major burst and push off the snap, Sarell is currently favored to stay in state at Washington.

3. S Jeffrey Okudah (Texas)
Okudah is the #7 overall player in the nation and the #1 safety. He's a pure secondary playmaker who's versatile enough to switch assignments mid-game and do damage. He's going to be a star.

2. DT Marvin Wilson (Texas)
The #1 defensive tackle in the class, Wilson is long and has a prototypically sturdy build, using his frame and reach to disrupt early at the point of attack and open up rushing lanes.

1. OLB Dylan Moses (Florida)
He's the #1 prospect in the nation, and he's currently being listed as an LSU lean despite already committing and decommitting from the program. USC's in the mix, regardless. Moses is the complete outside linebacking prospect -- combining pass-rushing prowess, coverage skills and run-stopping viciousness.