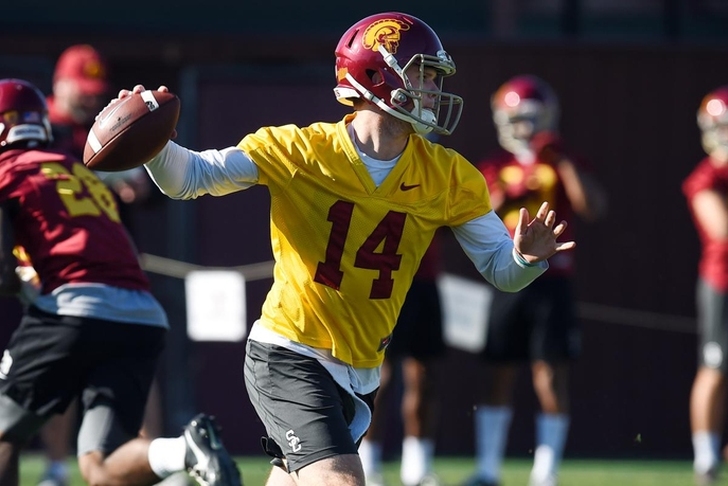 The USC Trojans have only two spring practices left before their spring game this weekend, which means the coaching staff is starting to figure just what they have on the roster this year. So with just those two practices left, it's time for an update on how last week's spring practices went. With that in mind, here's our USC Football Spring Practice Report.

Viane Talamaivao Injury
It's been an injury-filled spring for the Trojans OL and now Talamaivao is the latest victim. He underwent surgery to repair a partially torn bicep that will cost him the rest of the spring. On the bright side for USC, head coach Clay Helton expects Talamaivao to be good to go for the season opener. With 32 career starts, Talamaivao will be counted on a big way with three starters from last year's offensive line gone.

Michael Pittman Playing Well
The Trojans are down two of their top wide outs from last year in Darreus Rogers and JuJu Smith-Schuster. So they'll need someone new to step up and the early reports from spring practice are that Michael Pittman in playing quite well. 247Sports called him the best WR on the field last week and that's a promising sign. USC needs the former four-star recruit and top 60 player to step up in a big way this year.

Darnold Being More Aggressive
After throwing # of picks last year, Scott Wolf of the Los Angeles Daily News points out that QB Sam Darnold has now thrown nine in spring practice. Wolf fears it may be something the USC coaching staff needs to fix.

"What does matter is whether this is something USC needs to correct for the fall," Wolf writes. "The coaches seem indifferent so far, probably because they don’t want to criticize the rest of the offense. But it would be refreshing if they pointed out Darnold’s dealing with an inexperienced offensive line."

USC has an injured offensive line and a talented but raw receiving corps (as mentioned above). Darnold's turnovers aren't a major problem right now, but they could be come the start of the season.

Follow our USC Trojans team page for all the latest USC Football News or download the Chat Sports App!