USC Football Rumors Roundup: The Latest After The Firing Of Steve Sarkisian 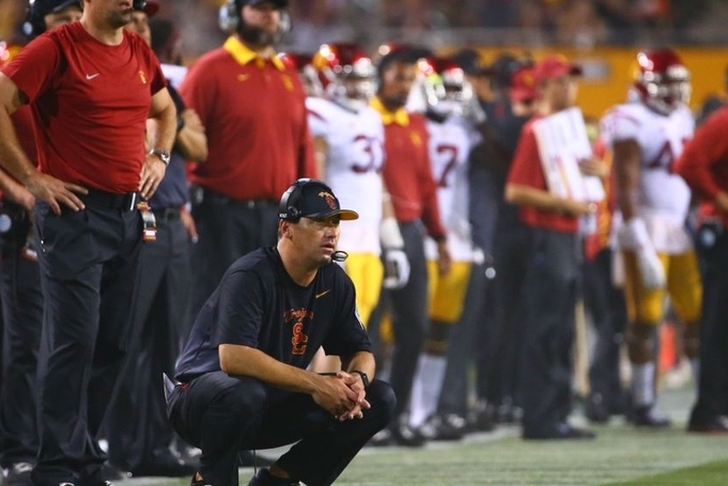 The USC Trojans have had an extremely tumultuous week with the firing of head coach Steve Sarkisian after new reports of extensive alcohol abuse, but they still have a big game to play Saturday against Notre Dame in South Bend. Here's the latest on USC's football team:

Clay Helton might be the interim head coach, but athletics director Pat Haden already has his sights set on these two coaching stars as the guys he wants to take over the USC program next year.

Sumlin was rumored to be USC's top target before they hired Sarkisian two years ago and is one of the hottest coaches in college football, having the Aggies in the top 15 this year after an 8-5 record last season. USC is already pushing hard to steal Sumlin away from Texas A&M, but he's No. 2 on their list behind Kelly.

Things haven't been going well with Kelly and the Philadelphia Eagles, but he would be welcomed back in the college football world with open arms. The former Oregon head coach already knows the Pac-12 and would be quite the hire for any college team in need of a head coach. If he doesn't return to the Eagles next season, he'll have his pick of jobs in the college game, and perhaps no other school has the widespread appeal, talent base, and recruiting prowess of USC.

Even with the search about to start ramping up, interim head coach Clay Helton said at his press conference today that would like to keep the job long-term:

“I want to be the head coach. I also know the reality of the situation, in college football at this level you have to prove yourself,” Helton said. “We will compete every day like Trojans. We will try to win every game that we have. We will fight everyday to be champions.”

Helton also served as the Trojan's interim head coach in the 2012 Las Vegas Bowl prior to Sarkisian being named the head coach.

According to a report from TMZ, USC doesn't just have to worry about keeping recruits on board - several players are thinking about transferring:

The parents of several current players, including starters, have told us they are "re-evaluating" whether or not to stay at SC next season following the Steve Sarkisian saga. Everyone we spoke with expressed disappointment in the USC football program -- with one parent telling us, "We feel let down by the coaching staff." "Here are some of the stronger quotes:

"My son turned down several schools to come play for Coach Sarkisian. He told us [our son] would learn how to become a responsible young man but his actions haven't been a good example. After this season, we will be re-evaluating whether or not to come back to the school.

Another parent told us, "I am just very disappointed in the whole program. I thought this would be a great fit for my son but I can see things much clearer now ... and it's not. I don't know if it's going to get any better."

"My son's high school team was more disciplined than the USC football program."

The report does not indicate which players are thinking of transferring, but it does suggest that there is a lot more turmoil within the program than was previously thought.