USC Football Coaching Hot Board: Top 10 Potential Replacements For Clay Helton - If He Gets Fired 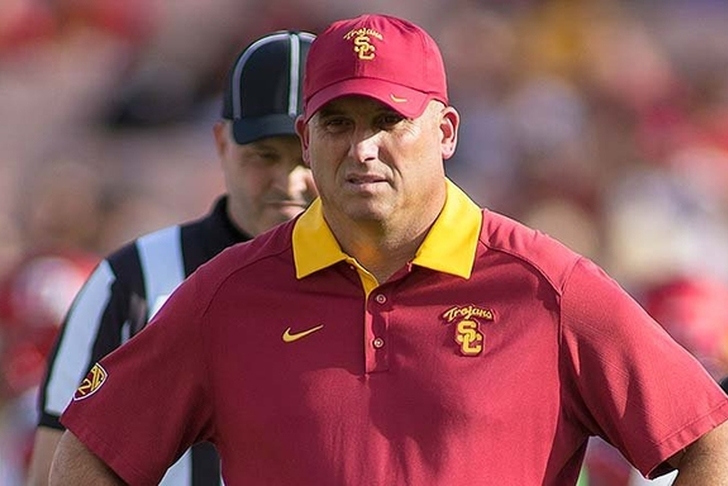 USC Trojans head football coach Clay Helton is only three games into the five-year deal he signed with the team after being named permanent head coach at the end of last season, yet there are already rumblings that he has lost control of the program. After a 1-2 start and five more ranked teams on the schedule, the Trojans aren't at risk of underachieving...they're at risk of a total collapse. If this season continues to go into a tailspin, Helton could well be on his way out this season - we know that USC has a standard of success and are tired of not reaching it.

If USC does decide to part ways with Helton, what options will USC vet as it searches for the man to return this proud program back to prominence? Here are 10 potential candidates that could take over after the season:

Fleck is one of the rising stars in the coaching world, taking the Broncos from a 1-11 team in 2013, his first year on the job, to 8-5 last year. This year, they're 3-0 with road wins over Northwestern and Illinois. At just 35 years old, he could bring a young energy to an USC program that's looking for a spark.

Orgeron has already been a USC head coach, leading the Trojans to a surprising 10-4 record after Lane Kiffin was fired mid-season. Orgeron was not happy he was passed over for the job in favor of Steve Sarkisian a few years ago, but may be willing to forgive that this time around. He's currently coaching the defensive line at LSU, but if USC is looking to bring back someone who has had success, then Orgeron could be a good fit.

The Utah head coach led his squad to 10 wins last season, including wins over USC and Oregon. This year, he has duplicated that success, starting the season 3-0 to bring Utah back into the top 25. Whittingham is a very underrated coach, and even if the USC job doesn't open up, expect Whittingham's name to be mentioned for a number of teams on the West Coast.

Freeze has come along way from being "the coach from The Blind Side." He's a young star in the coaching world and has had Ole Miss in contention for a SEC West title and a College Football Playoff berth each of the past four years. If USC were to come calling, Freeze would have a tough time turning down one of the sport's top jobs.

Last time around, former athletic director Pat Haden reached out to Gruden. Haden said Gruden wanted to coach in the NFL if he was going to coach again, but things have changed this time. Gruden is big name in the football world and would be a great pickup. Every time a major college football job open up, Sumlin's name is mentioned. He was rumored to be USC's top target before they hired Sarkisian a few years ago, and would be a top target again this time around. Sumlin has been on the hot seat in College Station, and while some of that has cooled due to Texas A&M's 3-0 start and No. 10 ranking, he may not feel comfortable (or appreciated) there.

Stoops has presided over a sustained period of success at an elite program. While he doesn't have any ties to the Trojans, Stoops is still a top-tier coach who could very well be available for the right price - especially since many OU fans are fed up with him. USC would be wise to kick the tires and see if he's interested. It may not come to fruition, but it's worth a look.

Drevno was reportedly USC's preferred outside candidate before they hired Helton on a permanent basis, and he would undoubtedly be one of the first calls they could make if the job became available again. He grew up a USC fan and served as the offensive line coach under Sarkisian in 2014.

No coach's star is burning brighter than Herman's right now, who has won a Peach Bowl and taking Houston to the No. 6 national ranking - and he hasn't even had the job for a year and a half. USC would obviously be a huge step up in pedigree, and the Cougars won't be able to match the kind of money the Trojans will be able to throw at him. He's the best young coach in the sport, making him an easy target for USC.