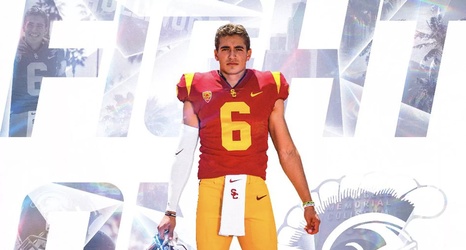 When news broke that Miller Moss had committed to the USC Trojans, it wasn’t shocking, yet it still sent shockwaves through the national recruiting circuit. It also sent a message to the entire Pac-12.

It also proved that head coach Clay Helton isn’t messing around and his ‘take back the West’ mantra is taking hold of recruits out west.

Keeping in-state, especially nearby talent is paramount to ‘taking back the West’ and Helton is doing just that. Moss joins fellow high-ranked quarterback prospect Jake Garcia as commits for the class of 2021 and they’ll friendly battle it out for the starting role once we get a season for them to do so next season (or the season after once Kedon Slovis heads pro).