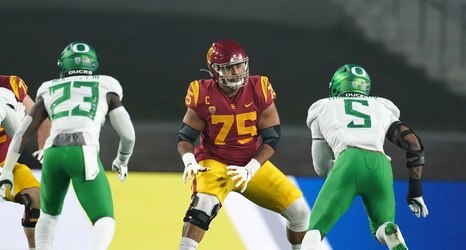 The USC Trojans football team is losing a ton of talent this offseason. With the 2021 NFL Draft more than two months away, prospects are gearing up to make favorable impressions during their pro days.

It’s no surprise to see offensive lineman Alijah Vera-Tucker ranked as the highest USC player. Michael Renner of PFF put the big man No. 30 on its list.

“Vera-Tucker’s quality play at tackle this past season made us feel even better about him on the inside.