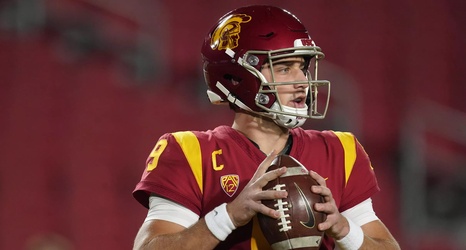 The USC Trojans will go as far as quarterback Kedon Slovis takes them next season. Going into his junior year, the 19-year-old is tied for the eighth-best odds to the Heisman Trophy.

It hasn’t been an easy offseason for Slovis, who suffered an undisclosed shoulder injury during last year’s Pac-12 Championship, which the Trojans lost 31-24 against the Oregon Ducks.

Head coach Clay Helton talked with Ryan Kartje of the L.A. Times and gave an update on his star QB’s status:

“You know, in the [conference] championship game on the last pass, [Slovis] obviously came away with a shoulder injury that has now healed.