RUMORS: Mass Exodus Of USC Players Might Be Transferring From Program 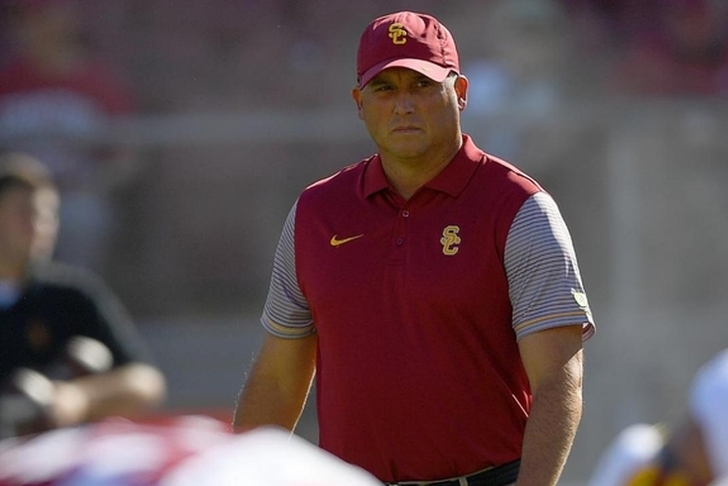 The USC Trojans have struggled in the first few games of the Clay Helton era, as their 1-2 start to the season brings their record to 1-4 since Helton was named permanent head coach on November 30.

However, there are several rumors spreading that USC has much bigger problems off the field.

Helton announced that true freshman offensive lineman E.J. Price will transfer from the program due to homesickness (he is from Georgia), yet there are reports that Price "popped off" at Helton and there's plenty of infighting going on in the program between the players and the coaching staff - and even between members of the coaching staff.

It appears that the Price-Helton incident is far from the only one, and may be the start of a mass exodus from the USC program. A user from the USC forum on 247sports reports that another offensive lineman, Chuma Edoga, has also requested his release from the program. According to Reddit user keyvaniath, several other players plan on leaving the program as well:

Others to follow; 4* Jamel Cook Freshman S (Miami, FL), 5* #1 OT Chuma Edoga Junior (A next-in line captain; Powder Springs, Georgia) 3* Ath Pie Young Freshman (Miami,FL) too expected to transfer (According to other boards, not confirmed. Says he loves LA). Not a good look and with Chad Wheeler and Zach Banner, although their ritual of a false start a game, are leaving (Seniors); their backups leaving sends USC's biggest strength, into a free fall. 5* #1 2013 RS Junior QB Max Browne (Skyline, WA) most likely transferring as a grad (i'd assume back home to Washington to WSU to throw the ball for a year before the pros); JR playmaker Adoree Jackson, Junior WR Juju Smith gone after this year, both to the NFL is expected.. This coaching staff has lost complete control and is a dumpster fire from start to finish. Hang on boys, it's going to be a long one.

That's a total of five players who have intentions to transfer, with two (Adoree Jackson, JuJu Smith-Schuster) already planning to leave for the NFL. Now, it is worth noting that Jackson and Smith-Schuster may be been preparing to leave before the infighting started as both are considered first-round prospects, but it's still not a good look if they have indeed already made up their minds.

For his part, Helton doesn't appear to want these players to change their minds, reportedly telling the team: "Anybody who wants out, let me know and I'll sign the papers." Helton is only a few months into his five-year deal, and it certainly seems that he has lost control of the program.

There is certainly a lot of smoke, and while there is no fire yet, it appears to be only a matter of time until the Trojans see a mass exodus.