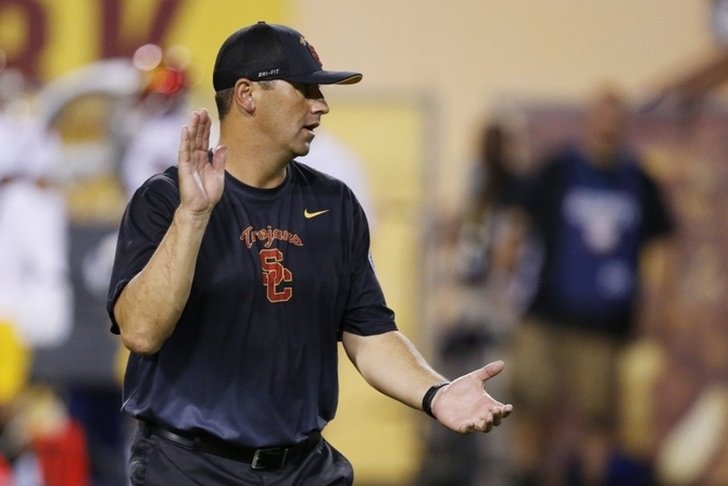 Am told by multiple sources Steve Sarkisian showed up in no condition to work today & #USC brass knows he needs serious help.

The seat of USC Trojans head coach Steve Sarkisian seems to be growing hotter and hotter with each passing game as Southern Cal continues to fall short of expectations, and that reached an all-time high following their loss at home to Washington on Thursday night.

Now, the speculation around his job security has spiked again following this report from Scott Wolf of the Los Angeles Daily News:

Sarkisian not at practice. Players told to go to meeting right at end #USC

#USC athletic department members J.K McKay, Pat Haden and Steve Lopes all were at practice, but no Sark.

Is Sarkisian out as head coach of the Trojans?

Sarkisian was already in hot water with the program after appearing obviously drunk and swearing during USC's "Salute to Troy" preseason pep rally. He said he mixed medication and alcohol prior to the event and will seek treatment, even though he doesn't believe he has a drinking problem.

Now after an extremely disappointing 3-2 start to the season - including a 1-2 mark in the Pac-12 - all hopes of USC reaching their College Football Playoff expectations are dashed. There are growing rumors Sarkisian will be fired after the season as boosters and alums aren't happy with his actions or production on the field (12-6 overall record at USC).

Stay tuned to Chat Sports for more on this potential story as it develops.