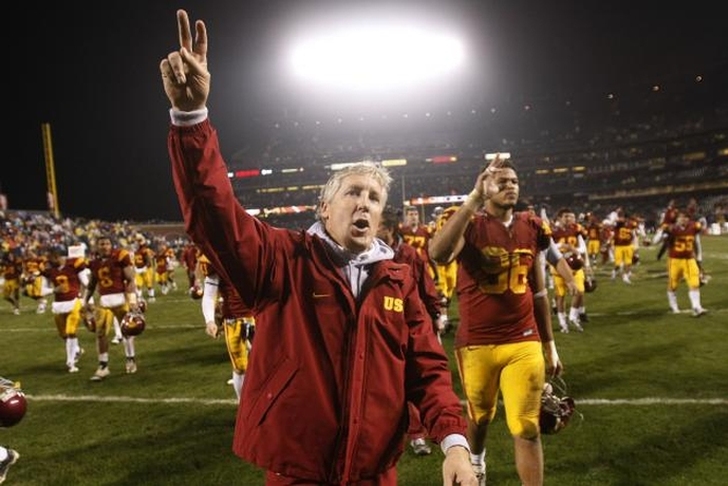 ESPN aired their latest documentary in their 30 for 30 series titled "Trojan War" on Tuesday night, detailing the rise and fall of the USC football program under head coach Pete Carroll.

However, it focused more on the height of the progam from 2003-2005 when USC won 34 straight games before losing to Texas in the BCS National Championship Game - and that was perfectly fine.

It's obviously the most heralded and interesting part of Carroll's tenure with two Heisman trophy winners (Matt Leinart, Reggie Bush) leading the offense to two national championships while becoming some of the biggest stars in Hollywood, all of which served as a prelude to that loss to Texas in the Rose Bowl.

The importance of that game as being the turning point of the USC program can not be overstated or oversold, and a large portion of the film centers around the inevitable clash between the two programs.

From USC's perspective, there was the realtive disregard for whoever their opponent was because of the cockiness that comes from a 34-game win streak. On the flip side, scenes of the Texas locker room and interviews with former Longhorns head coach Mack Brown and quarterback Vince Young showed viewers just how laser-focused Texas was all season on beating the Trojans.

That is followed by a lengthy overview and recap of the game itself, which was entertaining for all sports fans and brought about a lot of nostalgia for those who watched the game (now considered to be one of the greatest college football games of all time) live in 2006.

The other main topic outside of that one game was how Carroll was able to integrate the program within the Hollywood culture and lifestyle in Los Angeles, which was showcased with highlights of celebrities on the sidelines at games and having rapper Snoop Dogg in team meetings.

Those two storylines were enough to carry the documentary by themselves, and they had to. The buildup of the program from the time Carroll took over 2001 until the start of the championship era and the ensuing downfall following that title game loss were breezed over without much detail or substance.