Game-By-Game Prediction Of USC's Record In 2016 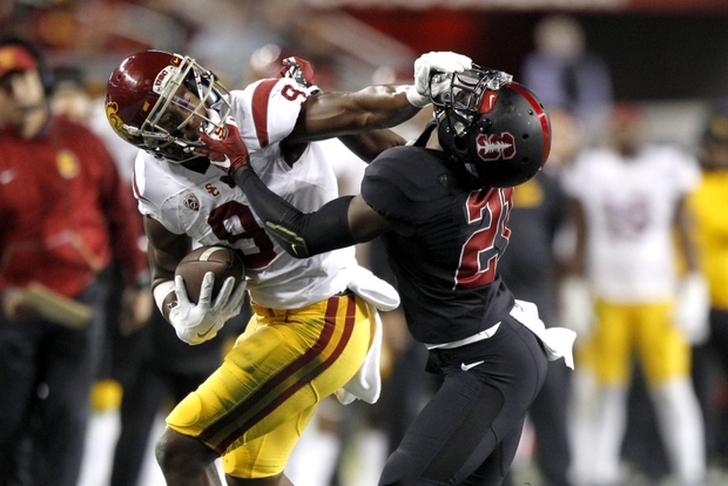 After a few years of coaching turmoil, Clay Helton is taking the reins full-time for the USC Trojans. He managed to lead them to a Pac-12 South title as an interim coach last year. But being a full-time coach and not an interim is different and USC could take a step back in 2016.

While there is still plenty of talent, the Trojans have a major question mark at QB and lost some of their key players. So can USC build on the success they found in 2015? Find out what we think with our game-by-game prediction of USC Football's record in 2016.

This is a neutral site game at Jerry World, but Alabama should have more fans. The Tide are the better team, and should come out on top. It might not even be close.

After playing Bama, USC has an easier game against Utah State. The Aggies were just 6-7 last year and USC should cruise to a win.

The Cardinal lost plenty, especially up front. But the result from last year's Pac-12 title game will be the same. It might be closer, but at home, Stanford is coming out on top.

This will be a pivotal game in determining the Pac-12 South champion. Utah went 10-3 last year, but should take a step back in 2016. It's a road game, but I like USC in this one.

I think ASU is better than their 6-7 record last year would indicate, but I don't think they'll beat USC on the road this year.

Colorado is not a good team. They'll be better this year, but I don't see them getting out of the Pac-12 cellar.

Which Arizona team will show up this year? I was high on them last year, but can't support them until they show something better than a 7-6 record. It's a road game, but I like USC in this one. However, it does have upset potential.

Jared Goff isn't the only key player Cal lost this year. I think they'll take a step back in 2016, and that means a win for USC. This should make them bowl eligible, which is a good thing given their tough closing stretch.

I was torn on this one, as I think Oregon will be better this year. But, USC is the home team. That gives the Trojans the edge for me.

The hype is building around Washington, which is why they're one spot behind USC in the coaches poll this year at No. 18. There's plenty of talent, although the Huskies might be one year away. But at home, I like them over USC.

This game could very well decide the Pac-12 South crown. UCLA is led by QB Josh Rosen, who should be the best in the conference this year. UCLA went 8-5 last year and I like them to beat USC and win the Pac-12 South this season.

This is a great rivalry and will be must-watch football. That's especially true if Notre Dame is fighting for a College Football Playoff berth. I think they will be and that they'll knock off USC.