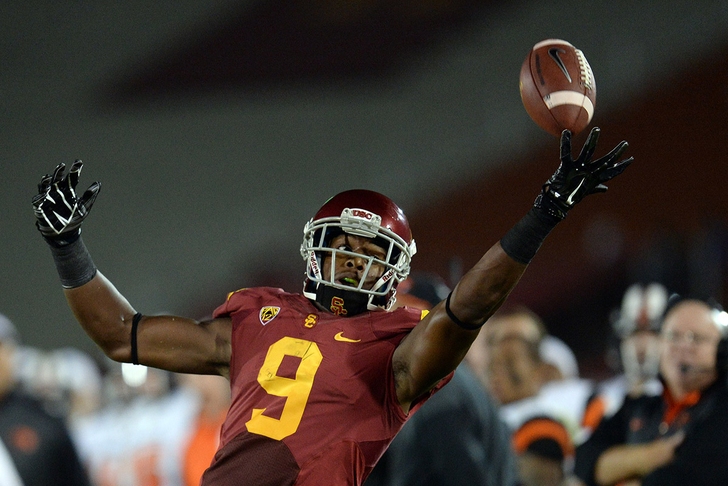 The USC Trojans finished off their spring practice session on Saturday with the program's annual Spring Game at the Los Angeles Memorial Coliseum. While the Cardinal squad beat the White squad 37-23, the day was more about getting an inside look into the construction of the 2015 Trojans roster. With that being said, here's 3 things we learned from the USC Trojans Spring Game.

1. The Offense Will Be Good Hands When Cody Kessler Leaves

Starting quarterback Cody Kessler looks primed and ready to bring the 2015 Heisman Trophy home to USC, but his eventual heir apparent was also a sight to behold during Saturday's scrimmage. Redshirt sophomore QB Max Browne was both accurate and versatile on Saturday, showing both touch and arm strength while making almost every throw that was asked of him.

Kessler's the unchallenged present, but Browne's definitely the future.

2. The Defense Is Still A Work In Progress

Defensive backs Chris Hawkins and Adoree' Jackson stood out in the secondary for the Trojans on Saturday, with Hawkins hauling in a pick and Jackson showcasing on-the-ball instincts that'll serve him well in 2015. However, the defense looked relatively thin from there on Saturday, and there's plenty of work to be done for this to unit to gel into a workable championship defense when the season starts.

3. JuJu Smith Is A Superstar In Waiting

Cody Kessler's the USC poster boy for good reason, but wide receiver JuJu Smith is going to turn some heads with his sheer athleticism and Pac Man-esque ability to gobble up passes from all kinds of different catch angles. With soft hands and electric speed that adds to a home-run threat every time he touches the ball, Smith reaffirmed on Saturday that he's ready to break out as a focal point of a potent Trojans attack.