USC Football Rumors: Are Playoff Expectations Premature For The Trojans? 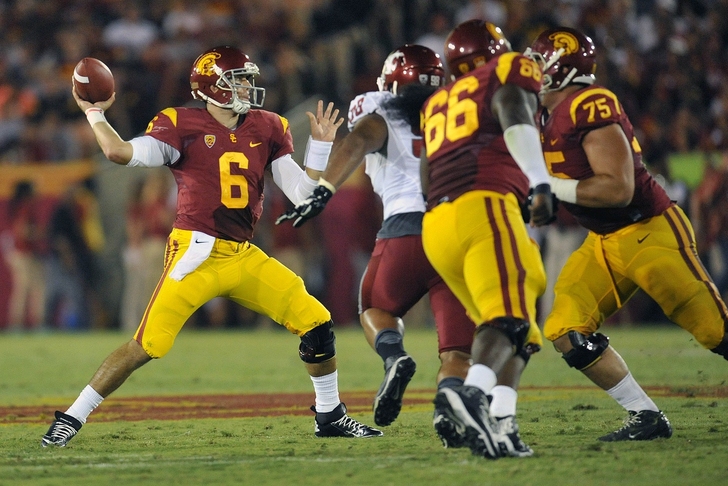 There's a distinct air of optimism surrounding the 2015 USC Trojans football squad this offseason, but WeAreSC.com's Garry Paskwietz is here to rain on the parade, or at least lightly drizzle on it.

In a recent article published by ESPN.com, Paskwietz called the playoff expectations for the program "premature". Here's a snapshot of his explanation:

...there is a long way to go before USC fans should start making reservations for the Orange or Cotton bowls. This is still a team that finished 9-4 last season, and lost their best defensive player to the NFL along with the leading rusher and receiver. There is still a coaching staff that is finding its way in its second year at USC, one that has seen great success on the recruiting trail and is looking to see those efforts pay off on the field. There is also the matter of some other pretty decent teams in the Pac-12 that the Trojans will face along the way. The conference is as strong as ever and it’s important to remember that, before USC can even make the playoff, there would have to be a first-ever appearance in the conference title game, and that would only come after road games in Tempe and Eugene, as well as the oh-so-important season finale against the Bruins.

It would certainly make a statement for Steve Sarkisian and the Trojans if they can navigate all that and make a legitimate run at the top of the college football mountain again. I don’t think it would surprise too many people to see USC back in that realm in the next few years, but to see it happen this year would be a little ahead of schedule. Of course, the possibility is part of what makes college football so exciting.

It's a respectable opinion, but there's enough talent on the team this year to turn a "premature" projection into a straight-up reality.