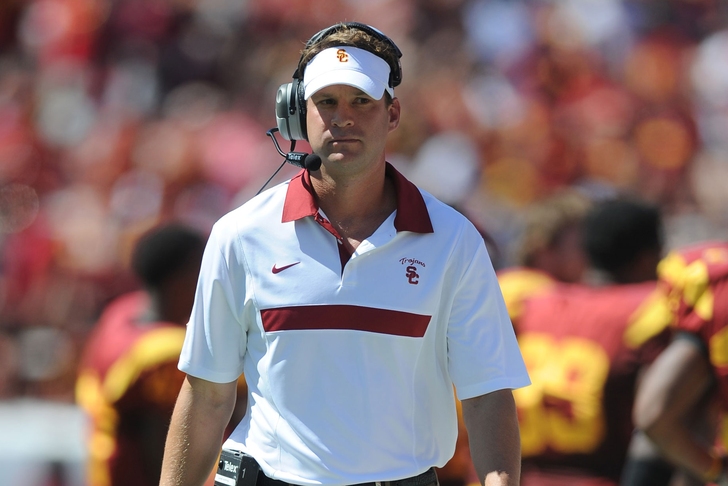 Brian Baucham played cornerback for the USC Trojans from 2008 to 2012. Mainly a backup who spent most of his playing time on special teams, Baucham was excited to take on a bigger role in 2012...but things took a nasty turn.

According to a suit filed in Los Angeles Superior Court yesterday, Baucham was “forced by Coach Kiffin to play a home game [against Cal on September 22, 2012] even though Mr. Baucham was very ill and diagnosed by the USC Health Clinic with an influenza-like illness, viral pharyngitis and dehydration.”

Baucham, also suffering from concussion symptoms, was sent to the locker room before halftime to receive intravenous fluids. Feeling progressively worse, Baucham collapsed during the fourth quarter and started coughing up blood after being carted back to the locker room. He was given more fluids, and was then taken to USC's Keck Medical Center.

"The excessive fluid pumped into the plaintiff caused an overload of fluid in his lungs requiring a ventilator to breathe for him for a number of days," according to the suit. "Brain imaging by CT scan revealed that plaintiff had sustained a brain injury and had bleeding into the brain."

After Baucham was released from the hospital, the suit claims USC tried to revoke his scholarship and pressure him into attending community college. Baucham hasn't played competitive football since.

“USC and Head Coach Kiffin were clearly negligent and acted with conscious disregard for Brian’s welfare and safety by forcing him to play in the California Golden Bears game, despite his verified medical history and seriously ill condition,” said Baucham’s lawyer, Bruce M. Brusavich.