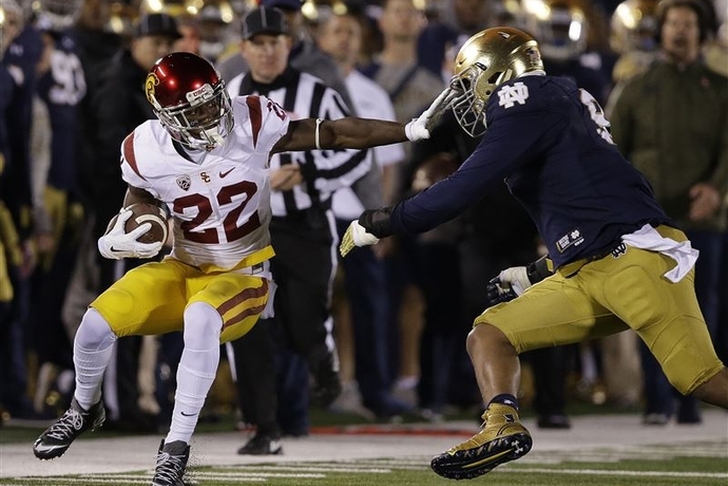 College football's unique in that a single loss could mean the difference between a conference championship (or the ultimate regular-season goal, a College Football Playoff spot) and becoming an also-ran in the FBS ranks. If the USC Trojans want to reach their goal of earning a College Football Playoff berth in 2016, they can afford a maximum of one loss. Here are USC's five toughest games heading into this year:

5. Oregon Ducks (November 5th)
USC and Oregon have played in several classic games over the past decade, and though the Ducks are expected to take a step back this year, you know they'll play hard against the Trojans. USC will have to bring their A-game to win.

4. at UCLA Bruins (November 19th)
USC snapped a three-year losing streak to their cross city rival last season, but this game is considered to be a toss up. UCLA is expected to take a step forward with QB Josh Rosen entering his second year, making them a very dangerous team.

3. Notre Dame Fighting Irish (November 26th)
Speaking of dangerous teams, Notre Dame lost just two games last year by a combined four points. They have the talent to play with anyone, and a College Football Playoff berth could be on the line in this regular season finale. Luckily for USC, the game is in LA.

2.  at Stanford Cardinal (September 17th)
A rematch of the 2015 Pac-12 title game, these two are expected to meet there again this December. Clearly the two best teams in the conference, the winner will put themselves in prime position to earn a CFP berth.

1. Alabama Crimson Tide (September 3rd)
There is no tougher way to start the season than to take on the defending champs. Alabama has a history of murdering good teams in season openers such as this, so USC better be ready to play.