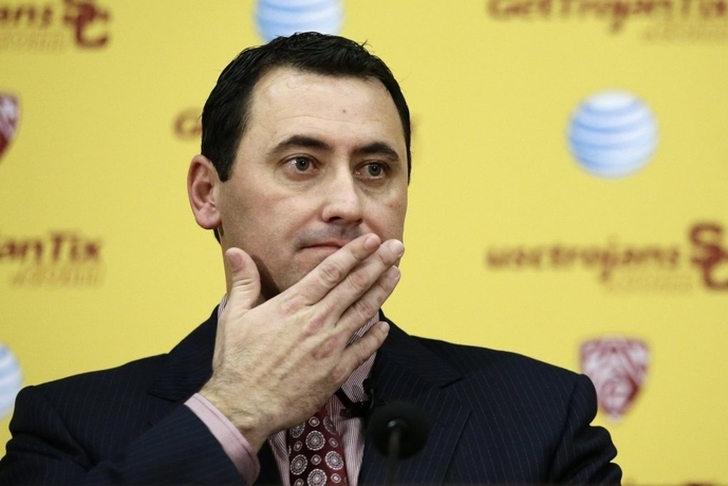 USC Trojans head coach Steve Sarkisian has found himself in hot water following his antics at a USC pep rally. Sarkisian said he mixed medication and alcohol at the event and will seek treatment, even though he doesn't believe he has a drinking problem. However, he might have an employment problem in the near future. There are growing rumors Sarkisian will be fired for the incident, as boosters and alums aren't happy with his actions. If Sarkisian is fired, an interim coach would replace him for the 2015 season and USC would have a new head coach in 2016. Here are five potential candidates to replace Sarkisian, if he gets fired.

Orgeron has already been a USC head coach, leading the Trojans to a surprising 10-4 record after Lane Kiffin was fired mid-season. Orgeron was not happy he was passed over for the job in favor of Sarkisian. He's currently coaching the defensive line at LSU. If Orgeron is over not getting the job last time and USC is looking to bring back someone who has had success, then Orgeron could be a good fit.

If things don't work out in the NFL with the Philadelphia Eagles, Kelly will still be welcomed back in the college football world with open arms. The former Oregon head coach knows the PAC-12 and would be quite the hire for any college team in need of a head coach.

Last time around, athletic director Pat Haden reached out to Gruden. Haden said Gruden wanted to coach in the NFL, if Gruden was going to coach again. Perhaps things have changed this time. Gruden is big name in the football world and would be a great pickup.

The Utah head coach led his squad to nine wins in the PAC-12 last season, including wins over USC and Michigan. Two of the Utes' losses were by three points or less. The PAC-12 South is really good, which will make winning harder for Utah. However, Whittingham is an underrated coach. Even if the USC job doesn't open up, expect Whittingham's name to be mentioned for a number of teams on the West Coast.

Every time a major college football job open up, Sumlin's name is mentioned. He was rumored to be USC's top target before it hired Sarkisian. Sumlin is one of the hottest coaches in college football, even after an 8-5 record last season. If Sarkisian is fired, USC will push hard to steal Sumlin away from Texas A&M.