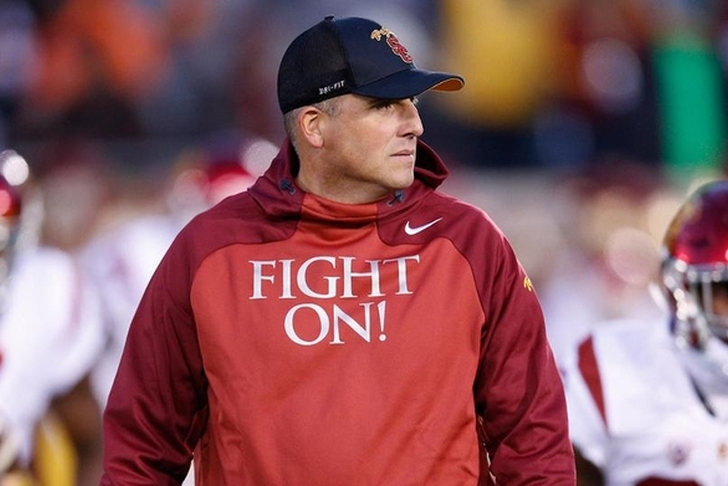 The start of fall camp in early August is nearly here for the USC Trojans. The Trojans battled coaching turmoil (again) last year, but still managed to advance to the Pac-12 title game. With Clay Helton now the full-time coach, he'll use use fall camp to get the new starters and newcomers ready for the season. As with every team around the country, there are some areas of concern for USC. With fall camp nearly here, it's time to take a look at the five biggest question marks surrounding USC Football.

5. How Are The Carries Divided?
This is almost a good question to have. USC has two gifted runners in Justin Davis and Ronald Jones II. Davis had more carries last year, but Jones was more productive. Those two should get a close to 50-50 split and the USC coaching staff should lean heavily on the running game with a new QB (more on that below). The Trojans also have Dominic Davis and Aca'Cedric Ware also deserve some touches. How the offense hands out the touches will be critical to the offense's success.

4. Will There Be Offensive Line Stability?
The Trojans have experience up front, with three juniors and two seniors. But injuries hurt the team last year (four different players saw time at center) and the team was thin during the spring. Those injuries resulted in quite a bit of shuffling up front last year, and the line would benefit from trotting out the same five guys each week.

3. How Does Clay Helton Handle The Full-Time Job?
Speaking of stability, can Helton provide the coaching stability the program has lacked in recent years? He's no longer the interim coach, and running a college football program on a full-time basis is very different. He guided the Trojans well last year, but 2016 will be a different challenge. Is he up to the task?

2. How Does The Revamped Front Seven Play?
USC is switching back to the 5-2 front under Clancy Pendergast, but that's not the only massive change. No starters return on the defensive line, and junior Kenny Bigelow is out for the year. The former five-star recruit was expected to start, but injured his knee. The Trojans are now left with mostly underclassmen to start up front, although there are talented players. USC also lost leading tackler Su'a Cravens, opening up a big hole at LB. The entire secondary is back, and they'll need to play great to help compensate for the losses up front.

1. Who Starts At QB?
Cody Kessler is gone and it looks like a two-man race for the starting QB job. Backup Max Browne is the favorite, but don't count out redshirt freshman Sam Darnold. He looked strong in spring practice and the battle will extend into the fall as a result. Browne, a redshirt junior, has a bit more experience, but Darnold might have the higher ceiling. The winner of the starting job will play a critical role in the Trojans effort to make it back to the Pac-12 title game.