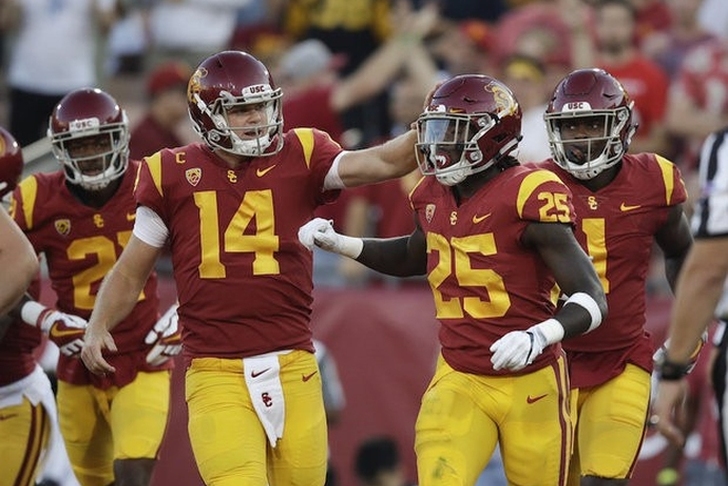 It wasn't pretty, but the #4 USC Trojans did just enough to avoid the upset and pulled off a 27-17 double-overtime comeback win over the Texas Longhorns.

USC's defense came up big all night and did so again in overtime, forcing a turnover to set up the game-winning field goal in double overtime.

Christian Rector comes up with the game-changing strip at the goal line for #USC! #TEXvsUSC pic.twitter.com/BkitYNDtI8

This game was expected to be a shootout but turned out to be a defensive slugfest. Close throughout, Texas looked like they were going to steal a win after taking a 17-14 lead with less than a minute to play.

Ehlinger finds Foreman to give #Texas the lead in the final minute!! #TEXvsUSC pic.twitter.com/FuaHTTf12e

However, Darnold led the Trojans down the field and put them in position to kick a field goal to send the game into overtime, where the two sides traded touchdowns before USC won it.

Ronald Jones II helped Darnold carry the load with 103 yards of total offense and a touchdown right before halftime while wide receiver Deontay Burnett also had a solid game with eight catches for 124 yards and two scores.

Texas' defense, which was ranked among the worst units in the country coming into this game, easily had their best performance in some time. Cornerback DeShon Elliott picked off Darnold twice, including that pick six, to spearhead a great defensive effort for the Longhorns.

The offense did not return the favor. True freshman quarterback Sam Ehlinger played well in overtime but finished just 21/40 passing and turned the ball over three times. Wide receiver Collin Johnson was easily their most explosive option, catching seven passes for 191 yards. The Longhorns were also never able to establish anything on the ground as no one rushed for more than 15 yards.

Texas has a bye week to gather themselves and will face Iowa State on the road on Thursday, September 28. USC will face Cal in Berkeley next Saturday.